Residents and regular visitors to the Greater Daglan Area may have wondered why I don’t write more frequently about Domme.

After all, it’s a real treasure of the Périgord Noir, and one of the most beautiful villages in France. It’s located on a hill just above the neighbouring village of Cénac, which we visit several times a week. Domme was founded in 1281, and it retains much of its medieval beauty. It offers a number of restaurants, cafés and shops, and has stunning views over the Dordogne River Valley. And in fact, Daglan is officially a part of the Canton of Domme. So, why not more coverage in Radio Free Daglan?

The simple reason is that we haven’t visited the village very often — simply because of Domme’s geography. I’m uncomfortable (to put it mildly) if I have to drive up a road that winds around a hill, with a steep drop-off on one side. And that describes the direct road into Domme from Cénac.

Now, however, we have a solution. It started last fall, when good friends Kevin and Shirley from Toronto were visiting us. I suggested that we could visit Domme if Kevin would do the driving, and he quickly agreed. While we were up in the village, we bumped into friends from Daglan, who told us of a different road into and out of Domme — a road that travelled along some gentle ridges and eventually made its way down from the heights. So that’s the route we took home, although with Kevin still at the wheel of my car.

Then, this past Saturday, we had just finished doing some shopping in Cénac when my wife Jan suggested that we try “the back road” into Domme, to see if I was comfortable driving it myself. So we did, and I was.

And here’s the pay-off: We each enjoyed a refreshing Campari and Perrier on the terrace of a café, while looking out over the Dordogne Valley. (Side note: The phrase Campari et soda doesn’t seem to be understood in France, because soda doesn’t convey the idea of club soda or sparkling water; our server asked us if we meant that we wanted a Coke with our Campari! So we’re learning to ask simply for a Campari et Perrier.) First, a view of our table:

Our table is complete with two glasses of Campari and Perrier.

And here’s a photo that Jan took, showing a few tourists on the promenade above the river. The bridge you can see in the distance crosses the Dordogne; that’s the road we usually take to Sarlat. In the distance at the far right of the photo, you can see cliffs dropping down towards the river, which is where the charming village of La Roque-Gageac is located. (It’s another must for visitors to the GDA.)

In the distance is the bridge crossing the Dordogne near Cénac.

Finally, here’s a photograph I took, using flowers in the foreground to frame an already beautiful view: 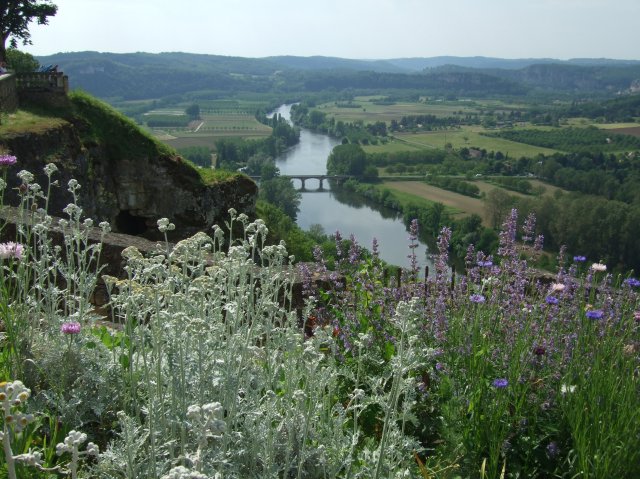 Summery flowers in the foreground; the river below.

When we left, it turned out there was some sort of carnival taking place in the main square, and several streets were blocked off. Because Domme is full of narrow, one-way streets, I had a bit of momentary panic as I worried whether we could return to the village gate where we had entered, the gate that leads to the kinder, gentler road home.

But sure enough, there it was — the Porte des Tours, or Gate of Towers. I later learned that the towers (on either side of the gate) had been converted into prisons in 1307. That’s yet another tourist attraction that we’ll have to visit one day, now that I’ve found a comfortable way to drive into Domme.

5 Responses to Camparis with a view