We had grand plans for a long sightseeing drive today, but the weather turned out to be rather drab and foggy. So for a change of pace, we thought: How about a nice lunch instead?

First we did our usual Saturday morning aquafitness session. And then, just after noon, we left Daglan for the village of Beynac, to one of our favourite restaurants, La Petite Tonnelle. (It must be said that the mere fact that it’s open now, when so many other restaurants are shut tight for “the winter,” is a big plus.) It’s a charming spot where we often take visitors, and it serves food that’s always good and often fairly inventive.

After the obligatory kirs as aperitifs, my wife Jan and I decided to try the 19-euro menu, which allows for a plat principal and a dessert. In the mood for something different, we both chose one of the day’s specials — a rognonade de veau with mushrooms and grainy mustard.

To be honest, we weren’t entirely sure what a rognonade is, although we figured it had something to do with veal kidneys, since rognons are kidneys and veau is veal. Our young waitress, who is always sweet and helpful, tried to explain the dish by saying that it was made up of small pieces of veal, and pointing (for some reason) to her wrist, which is not usually where kidneys are located. Anyway, we went ahead with the order, and were happy we did. Here’s the dish:

Kidneys with black trumpet mushrooms as a main course.

The sauce was rich and delicious, sprinkled with the little grains of mustard and embellished with one of our favourite mushrooms, black trumpets (also known as black chanterelles or, in the rather more dramatic French, trompets de mort or trompettes de la mort). The kidneys (and that’s indeed what they were) were cut into pieces, and had been sautéed properly until they were just pink in the centre. Served with the kidneys were small dishes of very good whipped potatoes, topped with more slivers of mushroom, like this:

Our "vegetables" -- whipped potatoes with mushrooms.

To accompany the food, I chose a  Médoc, one of the (several) classic wines from the huge Bordeaux wine region that lies to the west of the Greater Daglan Area. And in a rare show of moderation, I opted for a half-bottle. So here’s our half-bottle of 2009 Les Grands Cèdres du Château Sipian, snuggled up against my plate of kidneys and my nice slice of bread for dunking into the sauce: 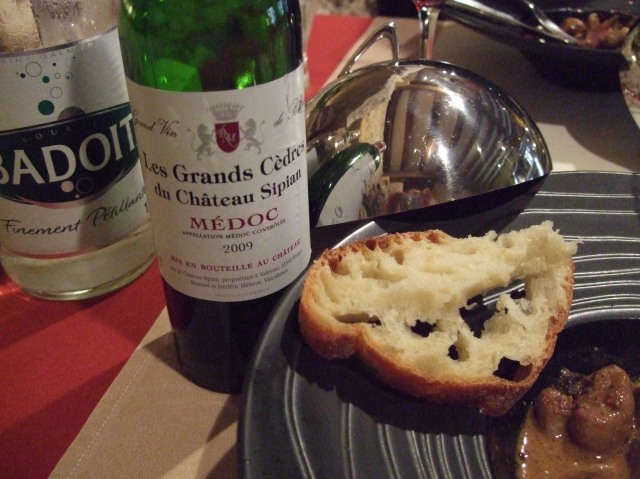 From the vineyards of Médoc to our table in Beynac.

To complete our lunches, Jan had a crème brûlée, while I had a sampling of cheeses, served with a tiny green salad garnished with (what else?) walnut pieces. 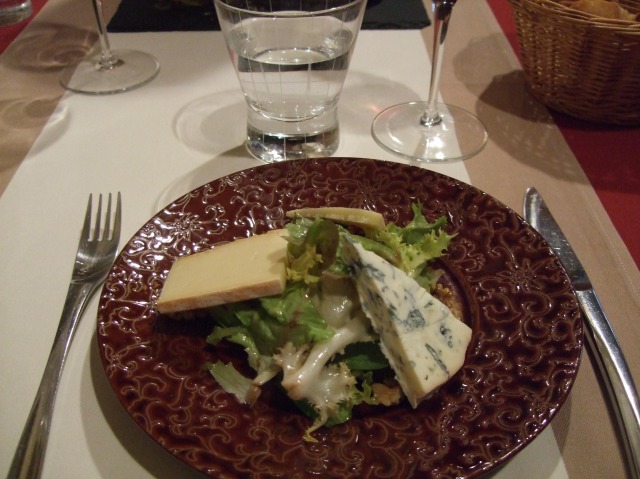 To complete the meal, a sampling of three cheeses.

Cheese is a nice way to end a meal, I think, as long as it’s served properly (not straight out of the refrigerator) and as long as there is a reasonable selection. This was fine — small pieces of Cantal, Saint Nectaire, and a Bleu de Corse (Corsican blue cheese). After lingering over coffee, we headed home, once again feeling bien content.

This entry was posted in French food, Life in southwest France, Restaurants in France. Bookmark the permalink.