So there we were, driving back into Daglan after a day spent taking French lessons, when all of a sudden something flapped down in front of our car. Fortunately I wasn’t going very fast (please note: the speed limit in Downtown Daglan is 30 kph), and I braked to a stop less than 10 metres from what turned out to be a small raptor.

It all happened so fast that it took a few moments for us to figure out what we’d actually seen. What my wife and I agreed was that the bird of prey had killed a dove, and had either followed it to ground as the dove plummeted down, or else flapped down to the street while holding on to the dove for dear life.

In any case, it was clear that the raptor was very keen to hang on to its dinner, and wasn’t about to move out of the street too quickly, car or not. Here’s how it looked to us:

Sitting on dinner -- in the middle of the street!

We had started taking photos as quickly as we could, but we were still a bit too far away. So I edged my car over to the left and moved a bit closer, so that my wife Jan could take better photos. By this time, the bird was getting a bit flustered, and tried taking off with its prey. However, the dove was relatively large and heavy, and so the raptor could manage only a few metres at a time before dropping back to the ground. Still, it did succeed in carrying the dove over onto the edge of the road, ready to be prepared for dinner.

Here’s a better view of the pair — the hunter and its dinner — before they left the street: 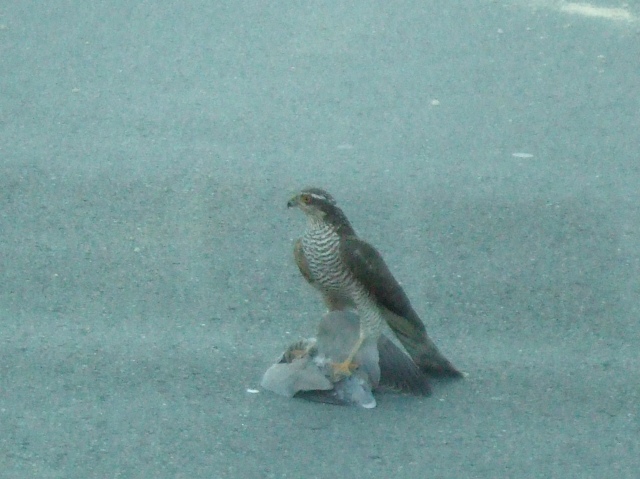 Standing guard over its kill, before flapping away.

Once we reached home, Jan retrieved her copy of The Pocket Guide to the Birds of Prey of Britain and Europe. After a bit of flipping through pages and comparing the pictures in the book with the photos in our camera, Jan concluded that our raptor was a young female Sparrowhawk, or Acipiter nisus. Apparently this little hawk is found in “almost all of Europe except the treeless north,” and it “hunts low down, taking prey by surprise: often inconspicuous until a sudden brief, close view.”

Shame about the dove, but then Daglan has quite a few to spare. And seeing the Sparrowhawk in action was a nice way for us to end the day.

This entry was posted in Flora and fauna, Life in southwest France. Bookmark the permalink.