We descend into pre-history

You may not know it, but the GDA (the Greater Daglan Area) is one of the crucibles of mankind. No kidding. In southern France and northern Spain, limestone caves provided homes to our ancestors tens of thousands of years ago, well before recorded history. And yesterday, my wife Jan and I paid our second visit to one of the great sites of pre-history, the caves of Cougnac — Les Grottes de Cougnac.

We first visited Cougnac — which lies just outside the medieval town of Gourdon, a 30- or 40-minute drive from Daglan — in the fall of 1998, on our first visit to the Dordogne and the Lot (a neighbouring département). Our memories of the place had faded, and we thought that a return visit would be worthwhile. Actually, it was terrific.

In fact, if you’re headed our way any time soon, I’d add Cougnac to your list. The cave paintings at Lascaux are more numerous and may be more famous, but I think that Cougnac is actually a more interesting and enjoyable attraction. It has far fewer paintings than Lascaux, but you are allowed to see the real things, in person. (At Lascaux, you are actually touring a reproduction of the original cave; the reproduction was created to protect the original cave, and preserve it for scientists.)

Your tour will begin at the ticket office. A ticket costs just 7 euros for adults, and while you’re waiting for your tour to begin, you can relax with a coffee or a drink in the waiting area, while you review the (free) brochures as well as the  postcards and books for sale. (We bought Cougnac, Les Grottes Magiques, for 5 euros.) Here is the ticket office:

Where your tour of les Grottes de Cougnac will begin.

Your tour will include two caves. In the first, your guide will explain how the limestone caves came to be, how the natural carbonic acid will dissolve the limestone, and how stalagmites and stalactites are formed over thousands and even millions of years. In this first cave, you are allowed to take photographs. Here is a first look: 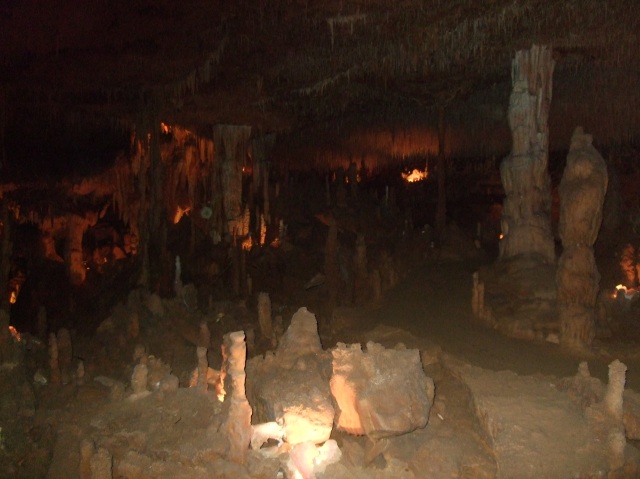 A first look at the first cave on your Cougnac tour.

The lighting is dim, but well done — you can see the highlights quite well. For example, here are some of the stalactites hanging from the roof of the vault: 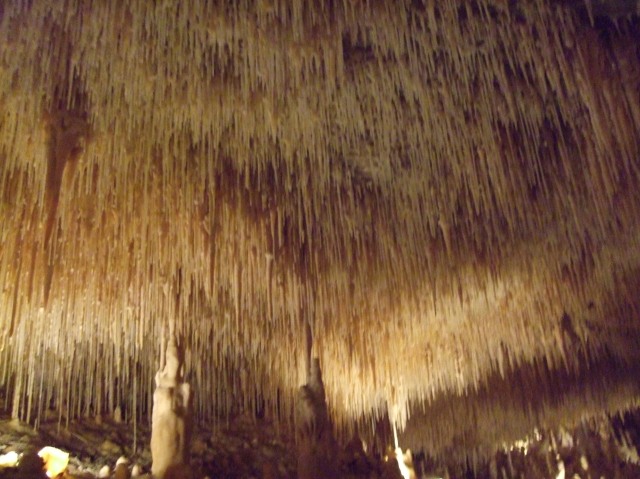 Now there's a ceiling for you!

And here’s another view of the stalagmites and stalactites in the large viewing area of Cougnac’s first cave: 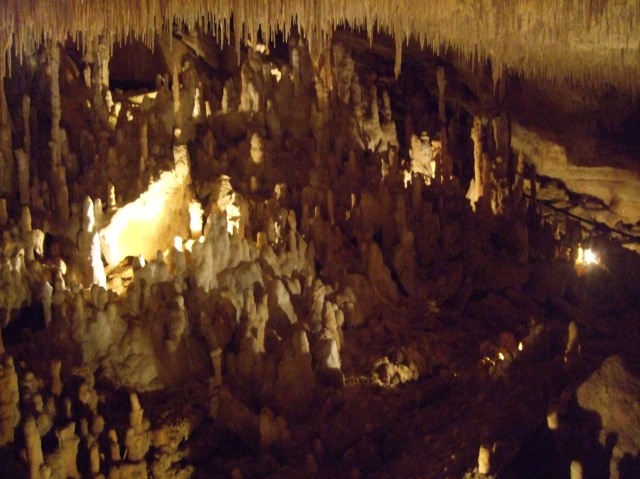 Another view of the cave's main chamber.

Finally, here’s a view upward to one of the main fissures in the top of the first cave: 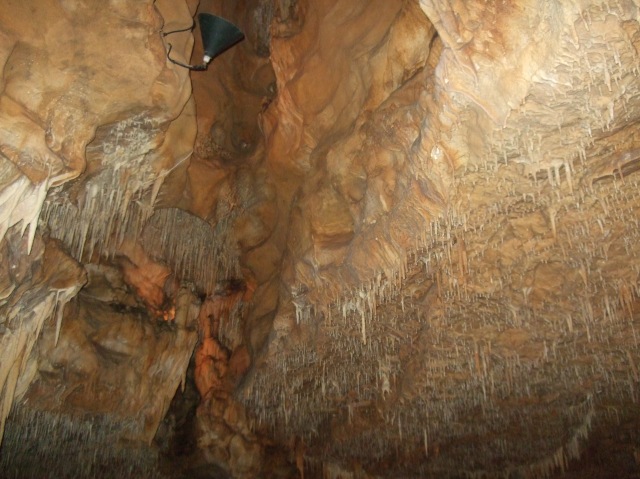 Looking up from the floor of the first cave at Cougnac.

Once you’ve wandered through the first cave, with the help of your guide, you will return up the stairs and start walking toward the second cave — where Cougnac’s paintings are found. You’ll be walking along a path on top of la colline aux chênes verts — the hill of green oaks — that looks like this: 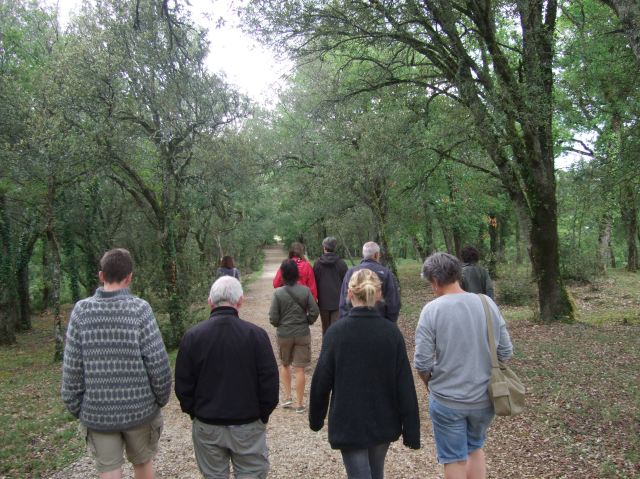 Walking toward the second cave.

After walking for five minutes or so, you’ll be approaching the entrance to the second cave:

The arrow points the way.

At the entrance to the cave, your guide will unlock the door, and explain that you cannot take photos inside the cave because the light from your flash can speed up the deterioration of the paintings. Here’s the door:

Our guide shows the way.

This second cave is truly magical. It has all the amazing “concretions” of the first cave, but also holds Cougnac’s treasured pre-historic paintings — which, according to Cougnac, Les Grottes Magiques, include 274 signs (or symbols), 22 animals, four human beings, one rubbed hand, and one “unidentified motif.”

These paintings were made over many years — and are as much as 25,000 years old. According to my booklet: “The frieze that visitors admire today is then, the result of successive additions and different interventions on the rock surface at different times during the upper Paleolithic period.” Now, I could not take any photos of the drawings in the cave itself, but I was able to photograph some of the reproductions in the waiting room at the ticket office. Here is one: 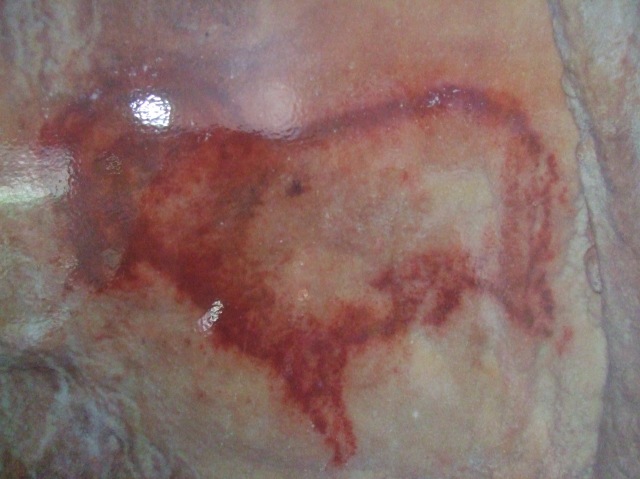 A reproduction of one of Cougnac's paintings.

And here is another:

A more complex painting at Cougnac.

All told, our tour lasted about an hour an a half. For the benefit of visitors, here are a few bits of advice and some observations:

Claustrophobia. Years ago, a friend of ours declined to enter a cave in the GDA, because of his claustrophobia. The caves at Cougnac are generally quite spacious (as caves go), with lots of vertical space (in the larger areas). However, tall people will have to crouch down from time to time, and of course the caves are indeed underground. For most people, I’d say Cougnac is not a problem at all. But if you have severe claustrophobia, I’d avoid this attraction.

Language. Unlike Lascaux, Cougnac does not provide your choice of English or French tour guides. Our (French-speaking) guide made a point of speaking slowly and clearly, so he was quite understandable most of the time. (Occasionally the language became pretty technical.) If you speak very little French, see if a bilingual tour guide is available, when you buy your tickets. You may have to wait for a while, but chances are good that you’ll get a guide who can at least answer your questions in English.

Clothing and footwear. The caves are not the place for your beach flip-flops — there is a fair amount of walking, and the footing can be a bit tricky from time to time. (Mother Nature — not Walt Disney — created these caves.) So wear sports sandals or walking shoes or boots or running shoes, that have non-slipping soles. The caves are also quite cool (13 degrees Celsius) so you probably will want to take a light jacket or sweater with you.

Your fellow tourists. If you possibly can, avoid a group like ours — which included a young mother and father who insisted on taking their toddler along the whole route, despite the fact that he cried miserably for most of the tour, often drowning out our guide’s words. Did it occur to the parents  that one of them could have taken the kid back out of the cave and given him lunch? Evidently not.

This entry was posted in Life in southwest France, Tourist attractions, Travels in and out of France. Bookmark the permalink.

2 Responses to We descend into pre-history