Biking the back road

This morning was sunny, hot and a bit humid. You could see the puffy white clouds being formed as the moist air rose, and could easily imagine that we’d have some rain this afternoon. So the idea for the day was to get an early start, and get out on the bike.

I’ve often written about taking the “back road” to Castelnaud, because it’s a favourite route. It generally follows the path of the Céou River, although much of the time the road is too far away for an actual sighting. The road reaches its end at Castelnaud, which is roughly where the Céou joins the mighty Dordogne River — and a favourite launching point for canoeists.

When we first came to Daglan, and the Greater Daglan Area, the road was pretty rough. Now it’s been paved most of the way, and it’s great for biking — almost no traffic, generally sheltered by hills, with some lovely scenery to enjoy. So here’s a few photos to give you a better idea.

When the road starts off — leaving the outskirts of our village, just at Bunny Meadows, it travels between farmland and forest, with a few houses along the way. Here’s a view looking north, with Le Peyruzel on top of the hill in the distance:

Looking towards the hamlet of Le Peyruzel.

For some of the way, there is forest on both sides of the road, like this:

Heading through a forested area.

The road passes through an awful lot of farmland — including walnut groves, fields of grain, sunflowers, some tobacco, and a fair amount of corn. Right now the walnuts are just starting to form on the ends of branches and the corn is fairly short, but the grain looks almost ready for harvesting. Here’s a view of the road passing between a field of grain on the left and a walnut grove on the right: 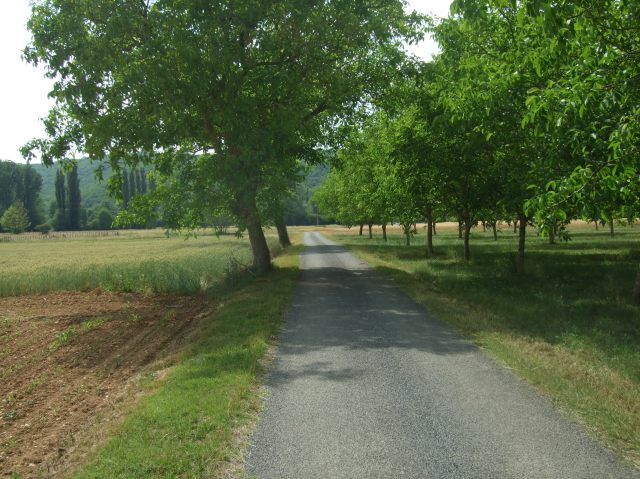 Between grain and a grove.

And sometimes, you are pretty much surrounded by fields of grain — as in this photo, which shows yet more hills and forest and walnut groves in the background.

Some amber waves of grain.

Once I reached Castelnaud, I decided to press on, and cycled past Château de Fayrac and eventually reached Château des Milandes, former home of the black American singer and dancer, Josephine Baker. By then it was time to head home for Sunday lunch — and I pedalled a bit faster on the way back, knowing that  my wife Jan was planning a wonderful meal of paella. And indeed it was.

This entry was posted in Bicycling in the Dordogne, Life in southwest France. Bookmark the permalink.

2 Responses to Biking the back road