Our first ride of the year

This afternoon was so beautiful that we thought it was time to dust off the bikes and head out for a ride, our first in 2011. Wouldn’t you know it — somehow we found ourselves in the middle of what seemed to be a pretty serious bike competition, racing through Daglan.

The excitement began just as I headed up our street and was about to turn left onto the main road through our village. Suddenly a small white car came hurtling towards me, making all sorts of racket (like the weird honking of an English police car) and flashing lights. Then, right behind it, were two riders on road bikes, helmets down and pedals to the metal, so to speak. Now there’s a surprise! It wasn’t long before the peloton came tearing through the village, chasing the two leaders. By then, my wife Jan had recovered from the initial surprise, and had the camera ready. Here they are:

You can tell it was a pretty serious (and well organized) race, because the emergency vehicle was just behind the racers.

An emergency vehicle, just in case.

Once we cleared the racers, we headed out of Daglan, over the Pont Neuf, past Bunny Meadows (without spotting a single bunny), in the direction of Castelnaud. Along the way, we saw some lovely sights, like this cascade on the Céou River. 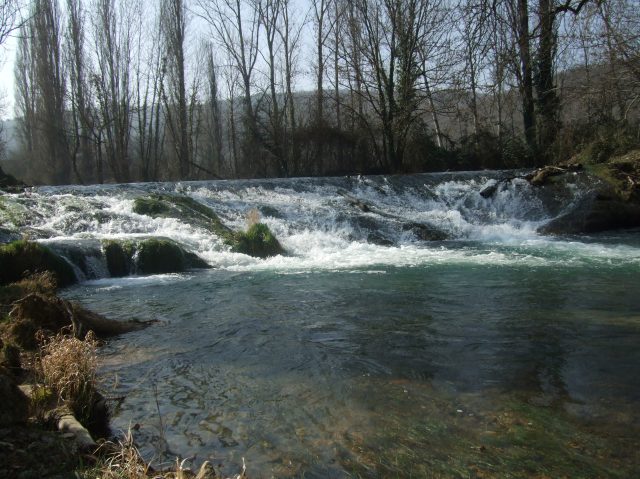 As we approached Castelnaud, we also saw two montgolfières — hot air balloons — floating above the Dordogne River. (During the height of tourist season, the air above our valley is thick with these beauties.) One was a garden-variety round version, in bright red, while the other was a more interesting shape. Here you see it above the bridge that crosses the Dordogne at the foot of Castelnaud:

In the distance, you can see the hot air balloon, above the Dordogne.

Oh yes — and one more sign of spring: As we headed back to Daglan from Castelnaud, there was a small group of people picking dandelions in a walnut grove. But sadly, on the final leg of our ride back home, still no sightings at Bunny Meadows. Where are those blasted rabbits?

This entry was posted in Bicycling in the Dordogne, Life in southwest France. Bookmark the permalink.