A sparkling, over-the-top welcome to 2011

This was our second New Year’s Eve in France. Our first took place in Paris, with friends Keith and Kathy, on December 31, 2004, soon after we took possession of our house in Daglan. On our journey back to Canada, we stayed in the City of Lights long enough to enjoy dinner at Juveniles, the wine bar-cum-restaurant, and then endure a two-mile walk through some very boisterous crowds back to our favourite Paris hotel, Le Tourville. Last night, in Daglan, was different.

For starters, the emphasis in the advertising was on food — a whopping eight-course dinner. In itself this was a challenge. Could we last the full eight courses? In addition, it was another chance to immerse ourselves in village life, because this New Year’s Eve celebration was to take place in the village hall, the Salle des Fêtes. And while we would not be with our friends from Toronto, we planned to enjoy the evening with all our new (and some not-so-new) friends from Daglan.

The bottom line? A sparkling, loud, over-the-top welcome to the New Year. At some time during the long evening, plastic bags were handed out with the usual and not-so-usual  assortment of New Year’s Eve paraphernalia. There were silly hats, a few noise-makers, sparklers, and what I’d call adult-size pea-shooters. As the sparklers were lighted up, my wife Jan and I weren’t immediately happy. What about all those dance hall fires in exotic places caused by fireworks gone out of control? As it turned out, nothing to worry about — so everybody went fairly ditzy with the sparklers. Like this: 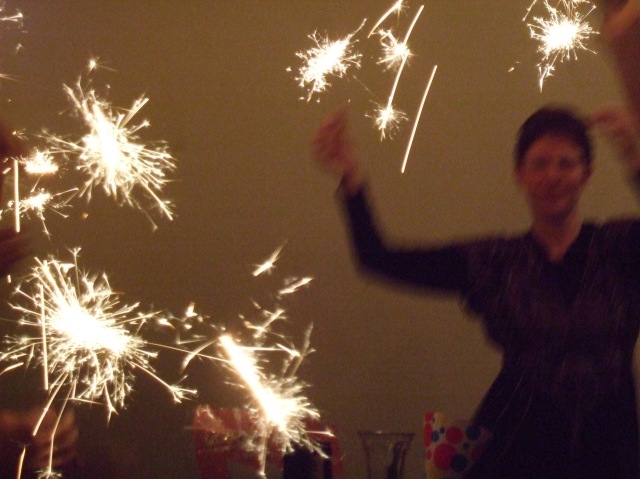 Lighting up our New Year's Eve.

Naturally, there was dancing — to an amazingly loud DJ who was obviously a fan of Spinal Tap and who believed that he could crank up the volume to 11. During dinner. When many of the Daglanais took to the dance floor, like this:

Dancing the night away in Daglan.

Dancing aside, the most fun was probably the adult-size pea-shooters. I confess I’ve never seen these before, and maybe Loyal Readers will think this is all very old-fashioned. But the act of blowing furiously into tubes and sending plastic marble-sized balls shooting across the room — bouncing off other people’s heads — sent many of the participants into fits of laughter. Like, for example, this friend of ours: 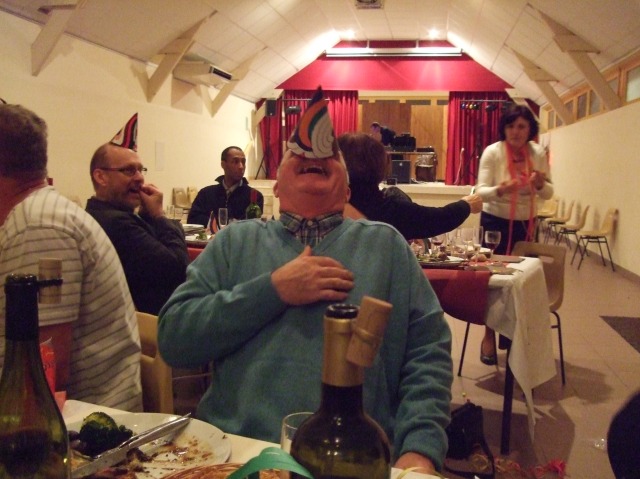 Laughing it up as 2011 approaches.

What about the food, I (almost) hear you asking? Well, there was lots of it, and it was quite good — although even I couldn’t eat it all. It began with lots and lots of Champagne punch and scads of appetizers. Then, after we sat down, we had the creamy soup with quenelles of turkey; foie gras served quite properly with a glass of Monbazillac; a delicious piece of white fish covered in julienned vegetables and baked in Phylo pastry; a beautifully cooked slice of beef Wellington; a cheese course; and a sampling of desserts. Plus immense amounts of white and red wine.

Still, it was the over-the-top fun and games that will be my lasting memory of our passage into 2011. For example, our village people dancing to the classic song “YMCA” by (ahem…) the Village People. For example, doing a Conga line. For example, wishing “Bonne Année, Bonne Santé” to countless friends and strangers while doling out kisses on the cheeks or handshakes (and sometimes both). For example, the heating system going full blast as we continued dancing at 2 a.m., finally giving up and walking home with our friends and neighbours Françoise and Jens. And of course, watching our French friends and neighbours waving their napkins during a song that I couldn’t understand — although I figured out that waving your napkin was very important. Because the waving went on, and on. With our Mayor very much getting in on the action. That’s her, on the right. 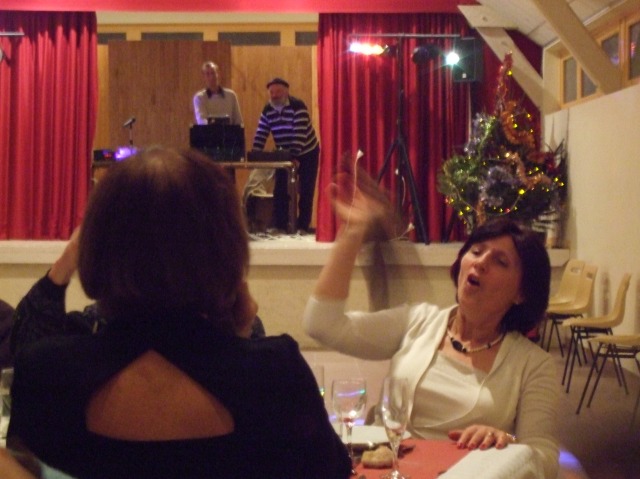 And so our New Year began. And today? Admittedly a late start out of bed, but then a lovely and warm day, feeling almost like early summer. Not bad, yes?

This entry was posted in French food, Life in southwest France. Bookmark the permalink.