Simple but substantial: That’s the essence of a typical menu du jour. Today our lunch was at Le Home, the hotel-with-restaurant that we favour in Belves, about 24 kilometres from Daglan, and we both chose the menu of the day.

This includes four courses, for a total of 12 euros. To begin, there was a tureen of rich but not overly creamy mushroom soup; this is a help-yourself dish, so you take as much or as little as you wish. Then came the entrée or appetizer, which I’ll describe in a moment. Then the main course or plat principal; for me, it was the tortellini. Finally, for dessert I had the tart made with pears and chunks of chocolate.

Now back to the entrée, which I’m highlighting not because it was so exquisite or artfully constructed or clever. Instead, I’m showing it off because it illustrates both the quality and abundance that can be served up in honest French food. On the platter placed on our table, there was the following: a salad of green beans; a salad of grated carrots; some wedges of hard-boiled eggs; some wedges of avocado; a salad of cooked beets; a few wedges of tomato; and three kinds of sausage. Not beautiful, maybe, but a nice selection of foods. Like this: 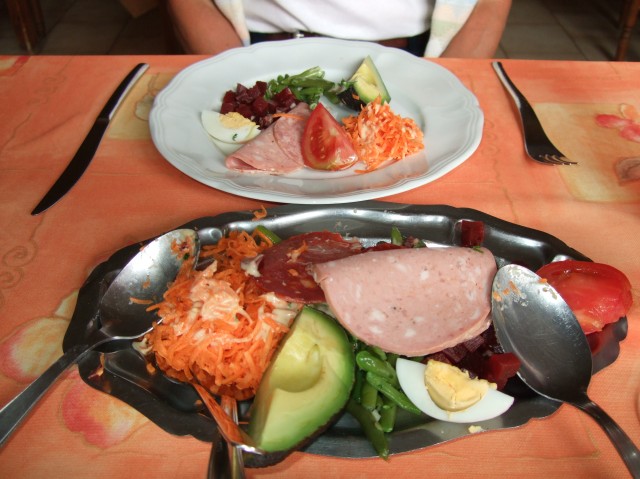 This entry was posted in French food, Life in southwest France. Bookmark the permalink.