After a delicious jambalaya dinner at Le Thé Vert, we decided to stroll the strip — checking the after-hours action that’s at the core of the Daglan fête. First stop, the kiddy bumper cars, at the south end of the village. (Yes, there are two different bumper-car rides: one for the kiddies, one for older kids and the occasional adult.) The kiddy cars  were zooming: 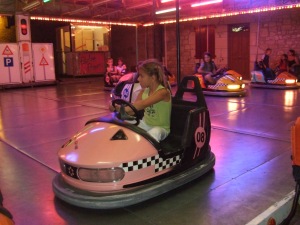 Then we moved along to the centre of the village, the square that’s very near our house, where the bumper cars for the somewhat older set are located. Again, the action was pretty good: 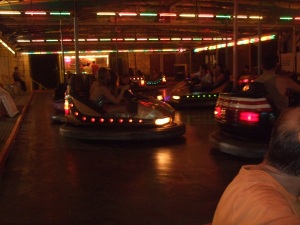 Finally, here’s a photo of some men about town, so to speak, stocking up at Le Palais du Sucre. (And listen, it’s not all about the cotton candy, or barbe de papa as they say here — there’s waffles and candy and lots of deep-fried donut-ish thingies.) In fact, it’s a virtual Sugar Palace!

What a rush -- a sugar rush

This entry was posted in Life in southwest France. Bookmark the permalink.